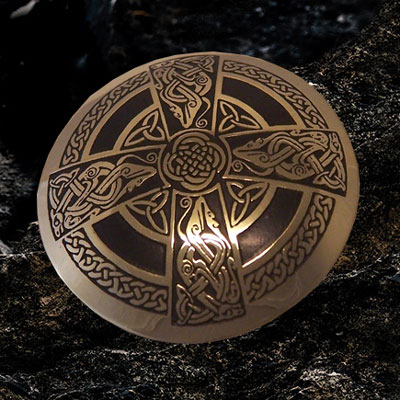 In Ireland, it is a popular legend that the Celtic Christian cross was introduced by Saint Patrick or possibly Saint Declan during his time converting the pagan Irish, though there are no examples from this early period. It has often been claimed that Patrick combined the symbol of Christianity with the sun cross, to give pagan followers an idea of the importance of the cross by linking it with the idea of the life-giving properties of the sun. Other interpretations claim that placing the cross on top of the circle represents Christ’s supremacy over the pagan sun.

A distinctive Insular tradition of erecting monumental stone high crosses began by the 8th century, and possibly earlier. An Irish example with a head in Celtic cross form is the Cross of Kells. Monuments of Irish heritage stand throughout the land, taking centre place in most town squares.

Paul has created his own unique Celtic Cross range of Celtic jewellery, available as a Celtic Cross brooch / pin, medium and large earrings and pendants, all presented on Paul Connolly display cards.